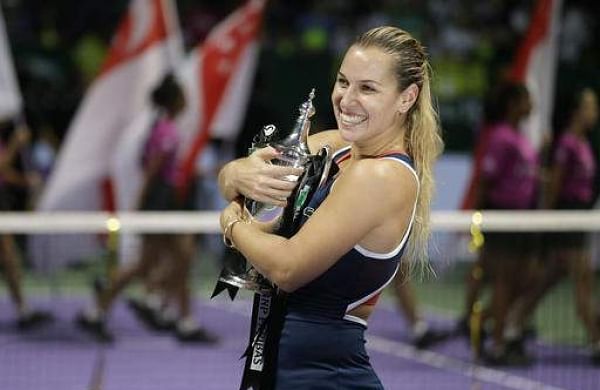 Dominika Cibulkova of Slovakia hugs her trophy after beating Angelique Kerber of Germany in their women’s singles final match at the WTA tennis tournament in Singapore. | AP

SINGAPORE: Slovakia’s Dominika Cibulkova, who pulled off a stunning upset over world number one Angelique Kerber to scoop the WTA finals Sunday, credited her mental strength for her winning performance.

Runner-up at the 2014 Australian Open, the former seventh seed denied Kerber a chance to end a remarkable year on a high, defeating her in a nail-biting 6-3, 6-4 final in Singapore that lasted 76 minutes.

“It’s a big thing now in my tennis that I work with a mental coach. I’ve worked with him for one and a half years.

“This is something very important for me, because as you can see, on the court I put a lot of emotions, and emotions just affect me,” she told reporters after her win.

Cibulkova turned the tables on Germany’s Kerber a week after losing to her in the first of three round-robin stage matches.

“This is a big moment for me. It’s the biggest moment in my career,” Cibulkova said at the presentation.

“It’s hard to describe in words (how I feel). I have to congratulate Angelique Kerber, you are an inspiration for me to play hard this year. With hard work, everything is possible.”

Kerber went into the final as the overwhelming favourite to win after taking this year’s Australian Open and US Open titles but the 28-year-old was powerless to stop her diminutive opponent, whose shock win capped an inspired return to the game’s elite that saw her named as this season’s WTA Comeback Player of the Year.

Cibulkova only just snuck into the WTA Finals, restricted to the world’s top eight players, when she won this month’s Linz Open in Austria but was facing an early exit from Singapore after losing her first two matches.

She only qualified for the semi-finals on a countback when Kerber did her a huge favour by beating American Madison Keys in straight sets, and Cibulkova herself and fought back from a set down to win against Svetlana Kuznetsova.

For her win over Kerber, Cibulkova was presented with the Billie Jean King trophy by tennis legend Monica Seles and a cheque for $2.05 million.

Kerber on the other hand was left wondering what went wrong at the end of a stellar year.

Oozing with self-belief after making the quantum leap from another promising player to the woman who dislodged Serena Williams at the top of the world rankings, Kerber had done everything right this week, giving up just set one in the four matches she played en route to the final.

The left-hander had won each of her last five matches with Cibulkova, but did not bank on her playing the match of her life, hitting winners from every part of the court, eliciting huge roars and gasps from the crowd.

“It was a tough year with a lot of matches, so I give everything on court today, the rest (of the) energy I had left,” Kerber told reporters.

“Of course when I’m looking back it’s one of my best years… I will just think about the best moments and the positive emotions.”

There were some anxious moments too for Cibulkova at the end.

She squandered three golden opportunities as her nerves started to fray, but regained her composure and was rewarded for her aggressive approach with a slice of luck, hitting a ferocious forehand that clipped the tape and landed on the other side of the net just as she fell to the court in disbelief at her achievement.