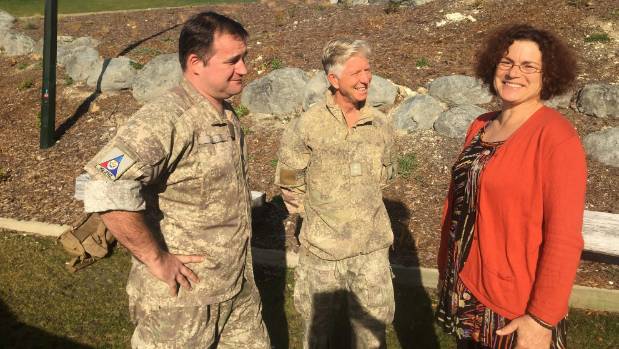 Armed forces are expected back in Kaikōura next month, but residents need not worry.

Kaikōura could potentially see 120 troops arrive before Labour Weekend, primarily by helicopter, with a number of Navy ships sitting off the coast between Kaikōura and the Marlborough Sounds.

For the exercise, where Kaikōura acts as a peace-loving, environmentally-aware community in made-up Alpira, troops will be based at the town’s Churchill Park domain.

In the scenario, they have come to control the border, which will be the Kowhai River, and provide security to the community.

Social recovery team leader Susi Haberstock said there were some concerns the sight of military people in the community might evoke reactions because of their presence in the recovery operation after the 7.8-magnitude earthquake in November.

Haberstock said having the forces in Kaikōura would probably be a positive experience though.

“The exercise is a fantastic thing to be involved with.

“I’ve only heard good things about what they did in the earthquake recovery response so I think it will only be a positive reminder of how well the community was looked after.”

This year, personnel will be deployed to the Marlborough, Kaikōura, Tasman, Nelson and Buller regions over October and November.

The first part of the exercise starts in Blenheim and is based around a scenario requiring military intervention due to political instability in the fictitious Pacific Island nations of Becara and Alpira, where there is a dispute over offshore oil reserves.

It is a continuation of the 2015 Southern Katipo war games that took place in the South Island, and the operation will take place on land, sea and in the air.

Military role players will make themselves known to the community, he said.

“There will be a bit of helicopter movement, troops on the ground, patrols on the streets and some engagement with the community in the seven to 10 days they are expected to be here.”

​Warrant officer Craig Ross said the community could expect to see the soldiers out and about interacting with people.

“New Zealand troops go out and work in the community and when we go to places like East Timor and Afghanistan our soldiers are well known for being able to patrol down the street.

“Rather than wearing helmets and carrying lots of big arms, they carry less arms and are more approachable, whereas a lot of forces tend to work in isolation and don’t interact with the community so they don’t get that exposure,” Ross said.