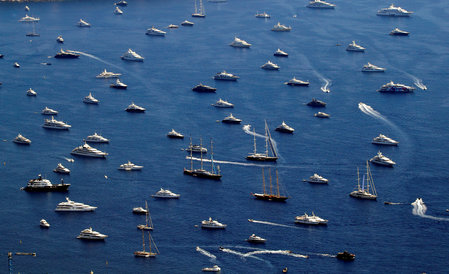 The number of millionaires in the world rose by nearly 8 percent last year to an all-time high of around 16.5 million people, with record total wealth of $63.5 trillion (55.70 trillion pounds), according to a report by global consultancy firm Capgemini.

The wealth of high net worth individuals (HNWI) — which Capgemini defines as those with investable assets of $1 million or more, excluding the primary residence, collectibles and consumables — rose 8.2 percent on the year in 2016 and is on track to surpass $100 trillion by 2025.

The United States, Japan, Germany and China boast the highest numbers and together make up for almost two-thirds of the total.

In the United States, their ranks rose to 4.8 million from 4.46 million, while the number of millionaires in China rose to 1.13 million from just over 1 million.

The Asia-Pacific, Europe and North America contributed equally to the rise in wealth, with Russia, Brazil and Canada reversing course from declines a year ago, the report showed.

Russia, helped by a rebound in its stock market, saw both the number of its millionaires and their wealth grow by about 20 percent.

France overtook Britain in the top five in terms of the number of millionaires, helped by a recovery in real estate, while Sweden knocked Singapore — which saw a decline in its equity markets — out of top 25.

Surveys on the millionaires’ financial asset holdings show they held 31.1 percent in equities in the second quarter of 2017, compared with 24.8 percent in 2016.

Fixed income held steady at 18 percent, while cash grew to 27.3 percent from 23.5 percent.

The report did not dive into the reasons for the reallocation, but stronger global growth, coupled with hefty liquidity after years of unprecedented stimulus by global central banks, have pushed stock markets around the world to record highs.

On the other hand, investors are wary of geopolitical risks, with tensions growing between the United States and North Korea, and are uncertain about the consequences the U.S. Federal Reserve’s exit from unconventional stimulus might have on economies and markets.