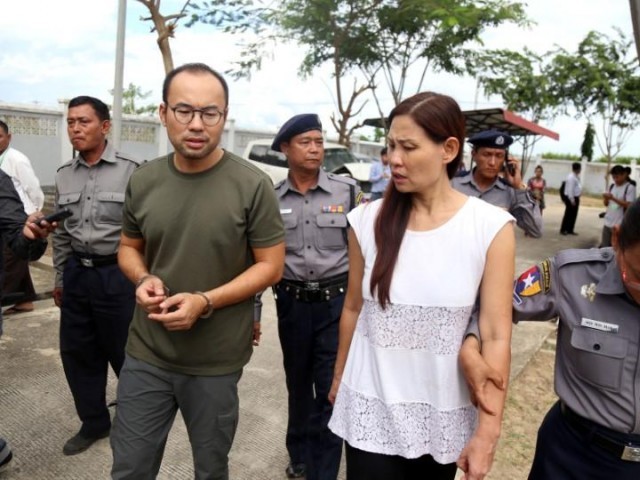 Cameraman Lau Hon Meng from Singapore (L) and reporter Mok Choy Lin from Malaysia arrive for their first appearance in the court after they were detained for attempting to fly a drone near parliament in the capital, Naypyitaw, Myanmar. PHOTO: REUTERS

Myanmar on Friday freed two journalists for Turkey’s state broadcaster, their local interpreter and a driver after they completed a two-month jail sentence for violating an aircraft law by filming with a drone, a prison official said.

Cameraman Lau Hon Meng from Singapore, reporter Mok Choy Lin from Malaysia, Aung Naing Soe – a local journalist who was interpreting for the pair – and driver Hla Tin were released from a prison at Yamethin, near the capital Naypyitaw.

Police detained the two journalists on assignment for the TRT World television station and the two Myanmar men on Oct. 27, when they attempted to fly a drone near Myanmar’s parliament building.

Reuters journalists in Myanmar remanded for another 14 days: lawyer

A court last month sentenced them to two months in prison under the colonial-era Anti-Aircraft Act. All four were until this week also facing an additional charge for importing the drone, and the two foreigners were also facing immigration charges.

“We released Aung Naing Soe and the crew at 7:20 am today because immigration and police have dropped the charges,” said Aung Myo Chun, chief of Yamethin prison.

“They have served their two-month prison sentence under the Anti-Aircraft Act.”

A police officer told Reuters on Tuesday he had been ordered to drop the charges because the four had not intended to damage national security and to improve Myanmar’s relations with the journalists’ home countries, Singapore and Malaysia.

A local photographer said the two foreign nationals left Yamethin prison by car but Aung Naing Soe and Hla Tin walked out of the prison compound.

Later, Aung Naing Soe told Reuters by phone that the release was a surprise.

“We have been arrested unexpectedly, and now we are so glad to be unexpectedly released like this,” he said. “We didn’t know that we would be released in the morning until last night.”

The case came amid tensions between Buddhist majority Myanmar and mostly Muslim countries like Turkey and Malaysia over Myanmar’s treatment of the stateless Rohingya Muslim minority.

Two Pakistanis among 262 journalists jailed for their work worldwide

In early September, Turkish President Tayyip Erdogan accused Myanmar of genocide in the western state of Rakhine, a charge that Myanmar denies. The United Nations has said an estimated 655,000 Rohingya have fled Rakhine for Bangladesh since the military launched a crackdown on militants in the state in late August.

Two Reuters journalists, who had covered events in Rakhine, were arrested on Dec. 12 and are still in detention over accusations they violated the Official Secrets Act, also a hangover from British colonial rule in Myanmar.

Their families said at a news conference on Thursday that the reporters, Wa Lone, 31, and Kyaw Soe Oo, 27, told them they were arrested almost immediately after being handed some documents by policemen who had invited them for a meeting.

Previous In Myanmar: Drone-flying camera crew freed from jail
Next Dollar heads into 2018 on a weaker note, Asia stocks mostly up