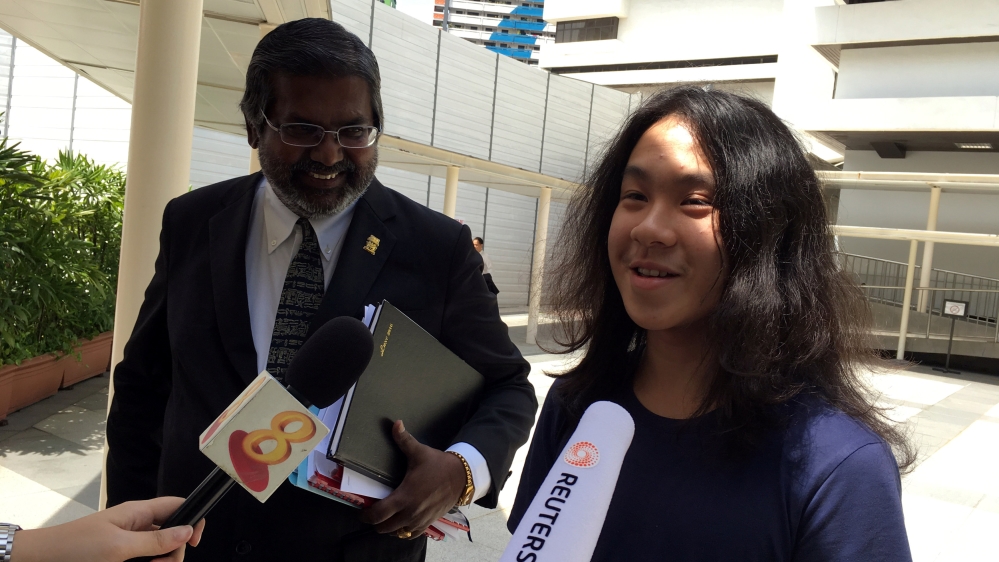 A court in Singapore has sentenced a 17-year old blogger to six weeks in jail after he pleaded guilty to six charges of “wounding religious feelings” of Muslims and Christians.

Amos Yee was also ordered on Thursday to pay $1,400 in fines for two charges of defying police orders to show up for interviews and, instead, fleeing Singapore.

Presiding judge Ong Hian Sun said Yee had “deliberately elected to do harm” in a photograph and two videos he posted online that were said to have “offensive and insulting words and profane gestures to hurt the feelings of Christians and Muslims”.

The judge, while saying Yee’s actions could “generate social unrest”, hoped he would not appear in court for similar offences again.

Yee, who was accompanied by his mother, described the sentence as “very fair”.

“I am very remorseful”, he said outside the court, surrounded by a handful of supporters.

Yee first made headlines in March 2015 when he was arrested after publishing a rant on YouTube criticising Christianity and Singapore’s first prime minister, Lee Kuan Yew, shortly after his death.

Yee, who will begin his sentence on October 13, is a known atheist and has been posting his beliefs on his social media channels.

Yee’s latest month-long trial was attended by officials from the UN Human Rights Council and the EU, and was closely watched by rights groups.

“By prosecuting Amos Yee for his comments, no matter how outrageous they may have been, Singapore has unfortunately doubled down on a strategy that clearly violates freedom of expression,” Phil Robertson, deputy director of Human Right Watch’s Asia division, said in an email.

“For a country that prides itself on efficiency, Singapore should re-examine its approach, because every time the authorities go after him, it just adds to his online audience who are interested to find out the latest thing.”

Amnesty International, the international rights organisation, called on Singapore to “repeal or amend legal provisions that criminalise peaceful dissent and end the intimidation and harassment of bloggers and other critics”.

David Kaye, UN special rapporteur on freedom of opinion and expression, said: “The lesson that somebody can be thrown in jail for their speech is exactly the wrong kind of message that any government should be sending to anybody, but especially to young people.”