One of Singapore’s greatest strengths is its predictability: in a region where coups and economic meltdowns are not uncommon, it has long been a haven of stability for investors and businesses. 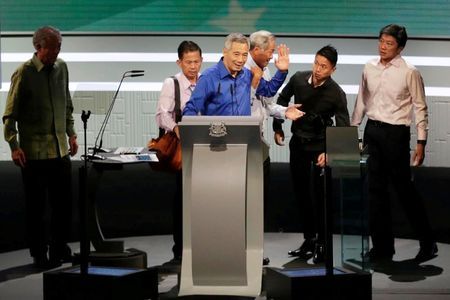 Singapore’s Prime Minister Lee Hsien Loong is helped off the stage after taking ill during his National Day rally speech in Singapore August 21, 2016.

But when Prime Minister Lee Hsien Loong almost collapsed during a National Day speech on Sunday, it brought into focus concerns that have been simmering for months about the future of the wealthy city-state.

The economy has lost some of the zest it had under the open trade-oriented model created by founding father Lee Kwan Yew, whose death last year for many marked the end of an era. Doubts have also started to emerge about Singapore’s position as one of the world’s leading financial capitals.

Singapore is vulnerable to attacks by Islamist militants: just this month, two Singaporeans were detained before they could join Islamic State in Syria and Indonesian police foiled a plot to attack the island nation with a rocket.

And, now, Lee’s stumble at the podium has exposed the apparent lack of a chosen successor, a remarkable state of affairs for a country where politics has been carefully managed since independence half a century ago under one powerful party.

“Singapore is indeed going through one of the toughest times with the economy faltering and the threat of terrorism,” said Inderjit Singh, a former lawmaker for the People’s Action Party (PAP), which has ruled without interruption since 1965.

“It is a concern that we are quite late in putting in place the fourth-generation leadership.”

Few see Singapore heading into a crisis, however. In last year’s election — held months after the death of patriarch Lee Kuan Yew — the PAP won almost 70 per cent of the popular vote and swept all but six of parliament’s 89 seats.

It was not the ruling party’s highest-ever vote. But it came as a huge relief after the 2011 polls in which the party scored its lowest vote since independence. The vote also belied growing resentment over a widening wealth gap, a high cost of living, and a flow of foreign workers who now account for nearly a quarter of the island’s 5.7 million people.

Doctors say that Lee, 64, has no serious health concerns.

Still, when he returned to the stage an hour after his turn, Lee said: “what just happened makes it even more important” to talk about succession.

Lee then mentioned Finance Minister Heng Swee Keat, who he said would soon resume his duties following a stroke earlier this year. Heng had been touted by local media as a potential successor, although doubts remain about his long-term health.

Other analysts mention combinations of the same names. What qualifies them for this unofficial shortlist is their experience in key roles in finance, education or defence as well as a track record of community work – much like the prime minister himself.

Another potential successor is Deputy Prime Minister Tharman Shanmugaratnam, some analysts said, though he has repeatedly denied interest in the job. Tharman is an ethnic Tamil and few believe that despite its multi-culturalism Singapore is ready for a prime minister who is not ethnic Chinese.

No matter who the next leader is, the recruiting and promotion system put in place by Lee Kuan Yew for the PAP will prevent radical shifts in policy, said Garry Rodan, director of the Asia Research Institute at Murdoch University.

“No maverick is going to come through this process. It’s incredibly thorough and institutionalised,” Rodan said. “There is less likelihood of any radical shift from any leader in the PAP compared with most other governments anywhere in the world.”

Furthermore, the opposition is widely seen as too weak to dislodge the PAP in the foreseeable future.

Singapore’s political stability is key to investors’ trust in the country.

“A smooth succession and policy framework is particularly credit-relevant for our assessment of the country’s susceptibility to event risk, given that Singapore’s political stability has never been tested through a transition away from the ruling PAP,” said Moody’s analyst Anushka Shah.

With growing use of social media, Lee’s government has come under more criticism than his father ever allowed, including from his younger sister, who has called his cabinet “authoritarian”.

Some analysts say an economy growing at only 1-2 percent, well below the rates that turned a seedy colonial port into an island bristling with hundreds of glass-and-steel towers, could increase popular discontent with the ruling party.

But unease about the succession can be felt at street level.

“In terms of having a stable leadership, it is important for me,” said 29-year-old marketing consultant Delon Wong. “There’s no clear candidate … right now and that worries me.”

Previous John Conceicao: Connecting Wellington to Singapore
Next Ranbaxy gets 6 weeks to file list of assets