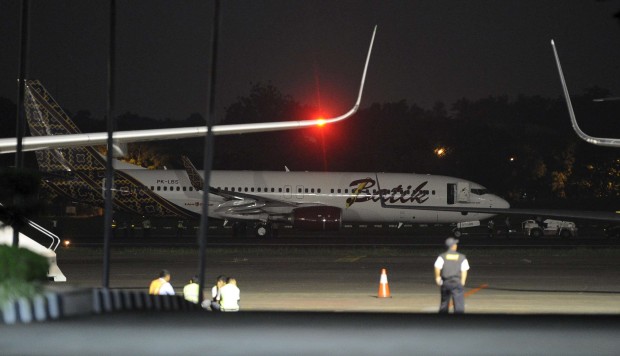 Two passenger planes collided late on Monday on an airport runway in the Indonesian capital, an airline spokesman said, causing minor damage but no injuries to passengers.

A Batik Air plane carrying 49 passengers and seven crew was taking off from Jakarta’s Halim Perdanakusuma airport when it clipped a TransNusa plane being towed across the runway.

Andy Saladin, a spokesman for Lion Air Group, said the pilot aborted the take-off of the Boeing 737-800 aircraft to ensure the safety of those on board.

“All the passengers and crew are safe, and will be flown using a replacement aircraft,” Saladin said in a statement.

Transport ministry spokesman J.A. Barata also confirmed there were no casualties and all passengers and crew were safely evacuated.

The left wing of the Batik flight was damaged in the clash and the tail of the ATR craft operated by TransNusa – another domestic airline mainly serving the east of the archipelago – was also mangled, Barata said.

Pictures on social media showed scorch marks around the damaged sections, with videos posted online capturing a brief fire before it was brought under control by emergency crews.

Barata said the airport in Jakarta’s east – primarily a military and government terminal that services some domestic routes – would be temporarily closed following the incident.

Edward Sirait, the president director of the Lion Air Group, said the company would await the results of an official investigation.

Indonesia’s air travel industry is booming, with the number of domestic passengers growing significantly over the past decade, but it has a dismal air safety record and reputation for chaotic regulation.

In 2013 a Lion Air jet with a rookie pilot at the controls undershot the runway and crashed into the sea in Bali, splitting the plane in two.

In December the following year an AirAsia plane crash between Indonesia’s second-largest city Surabaya and Singapore killed all 162 people on board.